With its unique products such as Usui Saifu, Hozon Suru Memo-Cho, Hiraku PC Bag, Mobilers Bag, Value Innovation Corp. has become a huge hit among members of the IT industry and fans of stationery products. In developed countries that are full of various products like Japan, many companies are struggling to make a profit because it’s difficult to get consumers excited about products even if they are well-made and affordable. How did Value Innovation find an answer to this problem? We discussed this with Kazushige Minami, the founder of the company.

It all started with trying to create a thin wallet

After studying cinema and economics at a college in the US and working for a banking firm in the US, a general trade company in Japan, a planning company, and a venture capital, Minami started Value Innovation in 2009.
“As a venture capitalist, I worked with various IT venture companies and started my own company afterwards. As the CEO of an entrepreneurial venture, one of the options for success is to get the company listed and produce major profits selling stocks. But for my company, I never considered that option. My main goal was to create a company where I would be able to keep doing what I loved. That’s how I started Value Innovation.”

At the beginning, the company primarily worked through commissioned website development, but it eventually expanded into product creation. The IT business is full of talented individuals and the industry itself is constantly changing. Minami felt that compared to the IT industry, product creation had more longevity as a business. Particularly, as opposed to products in the IT industry that are constantly being upgraded and changed, he believed the best business opportunity would be to work with everyday objects that have been around for a long time with little change.

His first project was the Usui Saifu(skinny wallet). “I hate carrying things around with me when I’m out and about, and I always wanted a thin wallet that would be easy to carry around in a suit. However, although there were small wallets, I couldn’t find any wallets that were thin, so I decided to make one. Since wallets have been around for so long without any innovations, there was little to no market competition. I realized that as long as I could create a good product, I could be successful.” 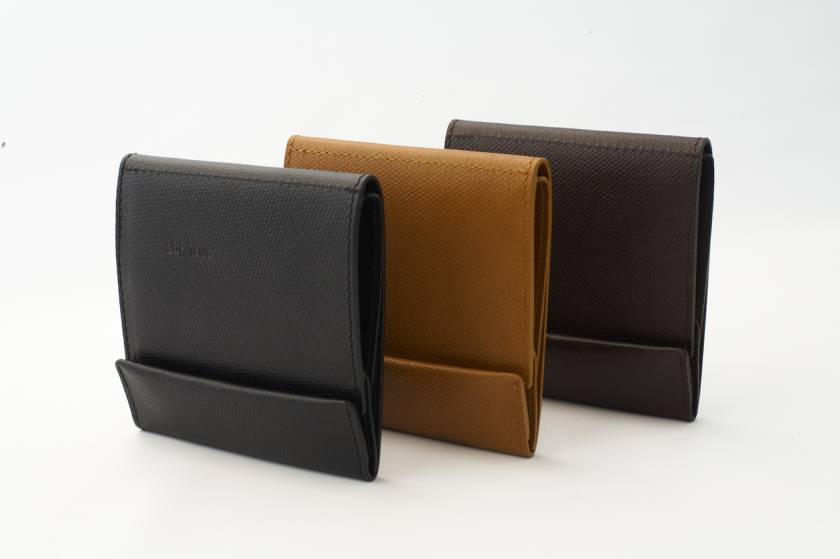 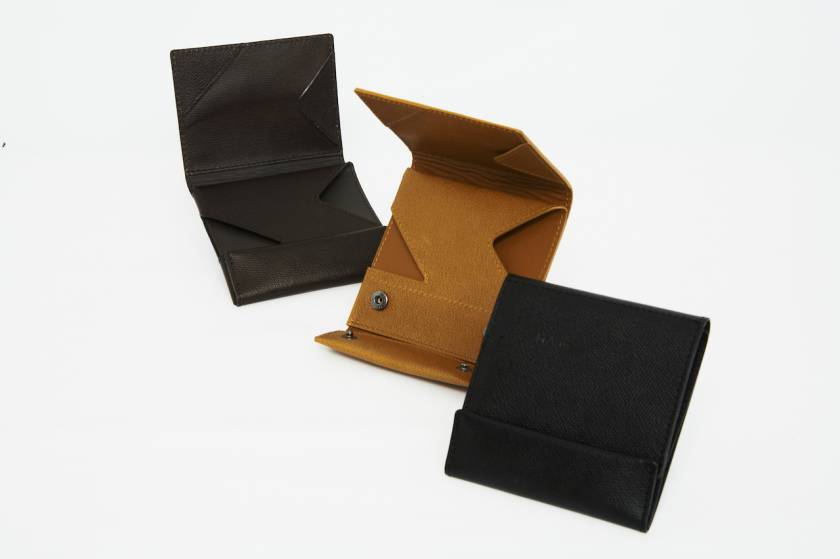 Although Minami had no experience in the production of goods, he had always been interested in general goods so he drew a design for the wallet, made a sample out of cardboard, and tested it out on his own.
“Workers at convenience stores were always surprised when they saw me take out the wallet. Well, of course they would! I mean, I was using a really low quality cardboard wallet!”

Minami kept upgrading the wallet. He made 30 different samples until he finally found one he was satisfied with. Once the shape of the wallet was set, he decided to try making it with leather. So he went to Tokyo Hands (Japan’s largest DIY shop), and on the day he went there just happened to be a live demonstration by an employee skilled with leather, so he was able to learn how to work with leather from nothing and used that knowledge to create a leather sample of his wallet.

“Once I created a product that I felt was satisfactory, I contacted numerous leather artisans to help me manufacture the product, but at the beginning everyone rejected my idea. Finally, one of my friends introduced me to an artisan that was interested in my wallet, so he agreed to work with me.” 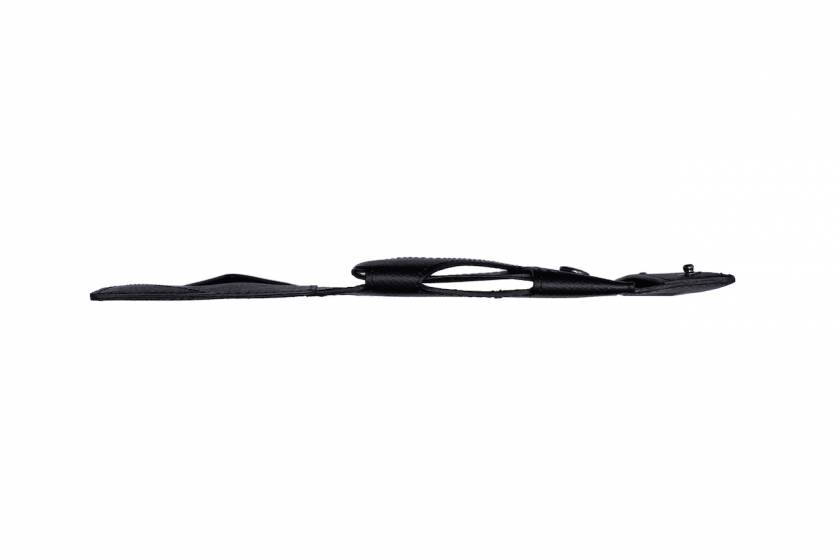 Through this, Minami successfully decreased the thickness of the wallet from the average 30 mm to only 13 mm (this was measured with wallets containing 5 cards, 10 coins, and 10 bills). This became the Usui Saifu, and it won the Good Design Award in 2013. It became Value Innovation’s most popular product. 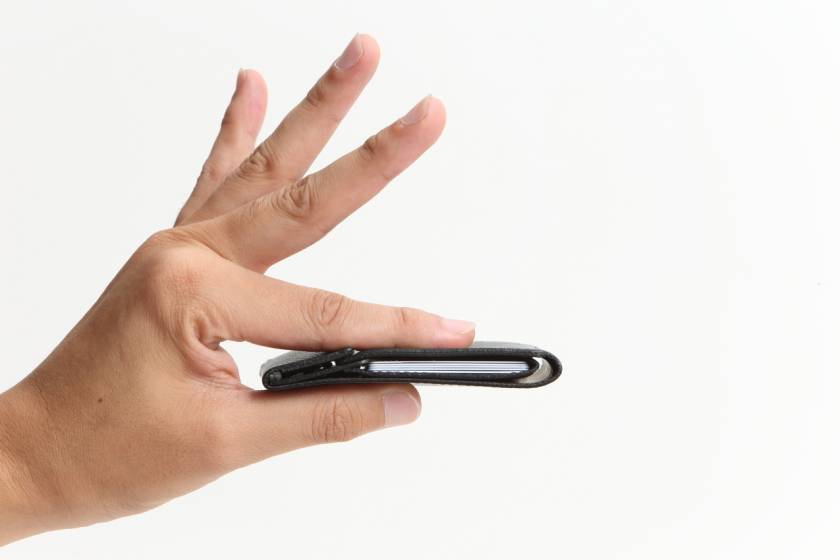 Creativity is born from a brand new business model

Value Innovation used this success as a catalyst to create more unique and new products. Under the brand name abrAsus, Minami imagined and designed various products such as Usui Money Clip (thin money clip), Chiisai Saifu (small wallet), and Hozon Suru Memo-cho (savable memo pad). By the way, the brand name of abrAsus takes the Japanese word Abura Sasu, which means “to throw grease on everyday life”, and combines it with the Latin word which means “to scrape off”. 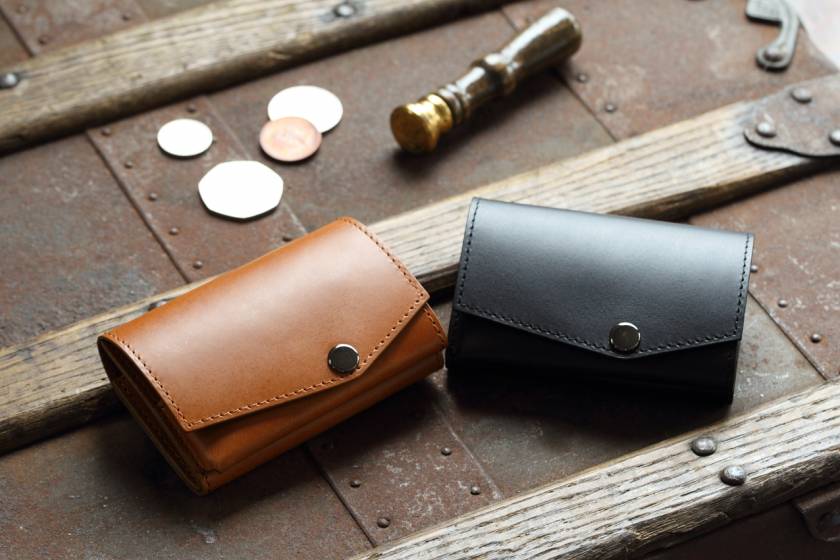 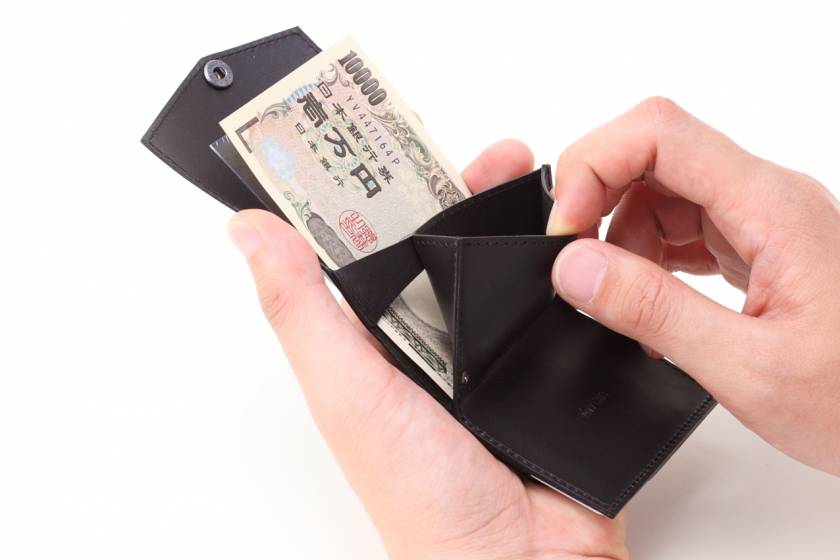 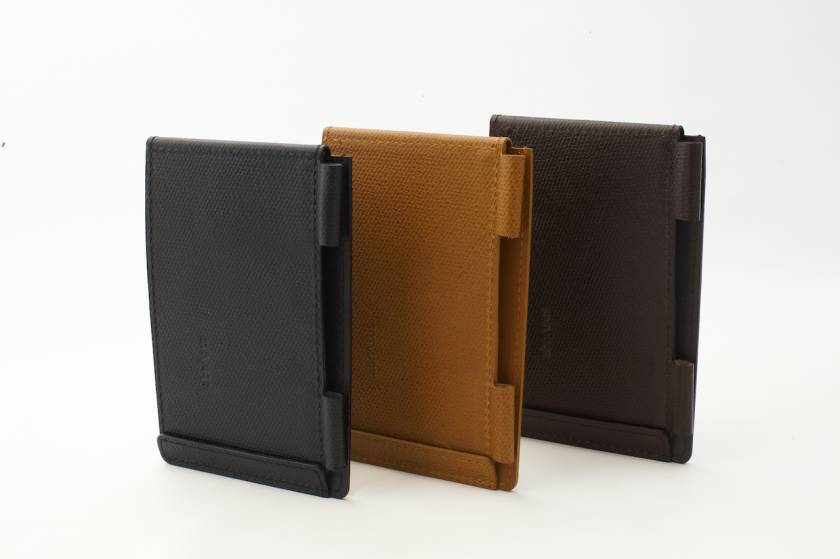 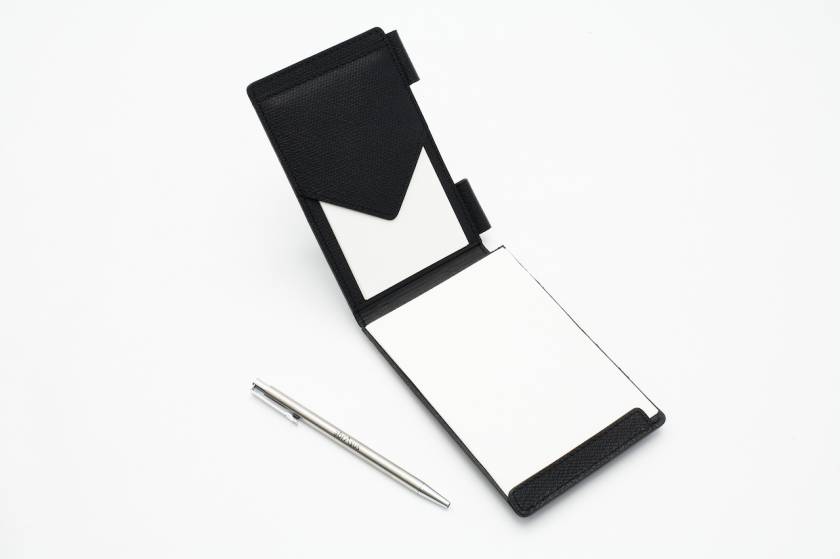 Where does Minami get his inspiration? Instead of a God-given talent, he believes his inspiration comes from the fact that he thinks about products 24 hours a day and is incredibly focused on finding ways to increase the function of those objects. In most cases, he lays out his ideas as logic trees or mind maps, records those ideas in Evernote, or writes the idea out on a white board and then spends time brainstorming by himself.

In addition, one of the main reasons he has been able to create these products is because the business model he uses is completely different from what is typically used.

“Up until now, the typical business model was to focus on marketing in order to move as much product as possible. This is why it has been hard for more niche and unique items to be picked up by vendors and buyers. But in my case, it’s important the product I make is something that I want to use. And then I try to create the product so it appeals to people who really want the product, even if it is a small market. In other words, my strategy is to focus on the tail part of the long tail market strategy. This type of business strategy is able to exist today because of the ability to sell products on the internet.”

In this way, when Minami is developing a new product, he doesn’t base the value on the question of “Will it sell?” The most important question for him is “Do I want to use this?” Basically, he doesn’t worry about market volume. This is why the majority of his products don’t overlap with other products in the market.

“It’s a good thing if only 2 or 3 out of every 10 ideas overlap. Having too many isn’t something you hope for.”

He also doesn’t decide on a price right away. At Value Innovation, they decide on the prices for their products only after completing production so they can get an exact idea of how much production costs will be.

Also, the fact that Minami, who was undoubtedly an amateur when it came to product development, was able to create something that was accepted by the market gave him a lot of confidence in himself, and he uses that to help make ideas from other people a reality. There are plenty of people in the world who have incredible ideas but do not know how to make those ideas into products. Many of those people even eclipse mainstream companies as fanatics of certain products, such as stationery items, cameras, and bags, and have ideas that major companies would have difficulty coming up with. Minami started up a new project called Super Consumer aimed to create items from ideas that have resonated with him. Minami creates the sample and manages production and distribution, taking on all the risk that comes with making an idea into a product. From this project, Minami has released Bungu-ou Techou(notepad for the king of stationery), a product that came from Masayuki Takabatake (known as the Stationery King after winning an award for stationery on a Japanese TV program), as well as the Hiraku PC Bag (open PC bag) and Toreru Camera Bag(removable camera bag), both ideas from Masaki Ishitani (a professional blogger, writer, and web marketing consultant). Minami records everything about the production of the items and has released those recordings as podcasts and entries on his blog. 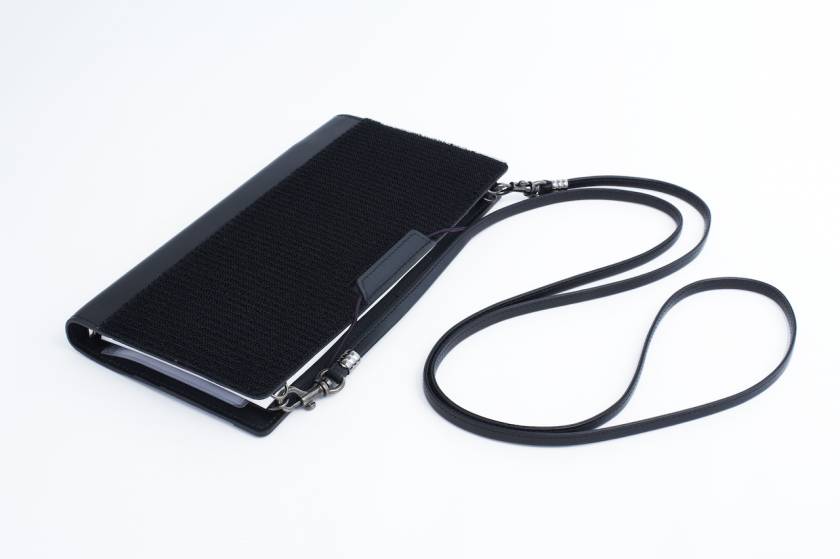 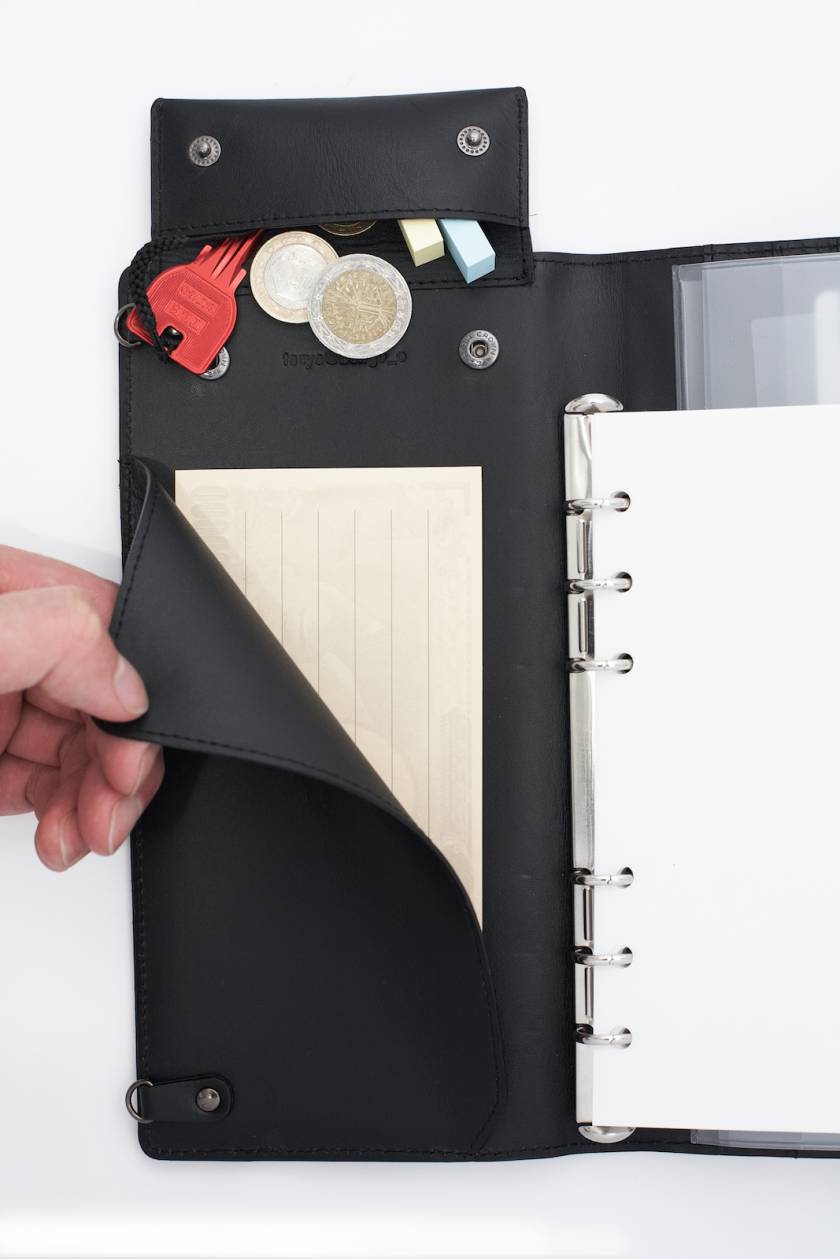 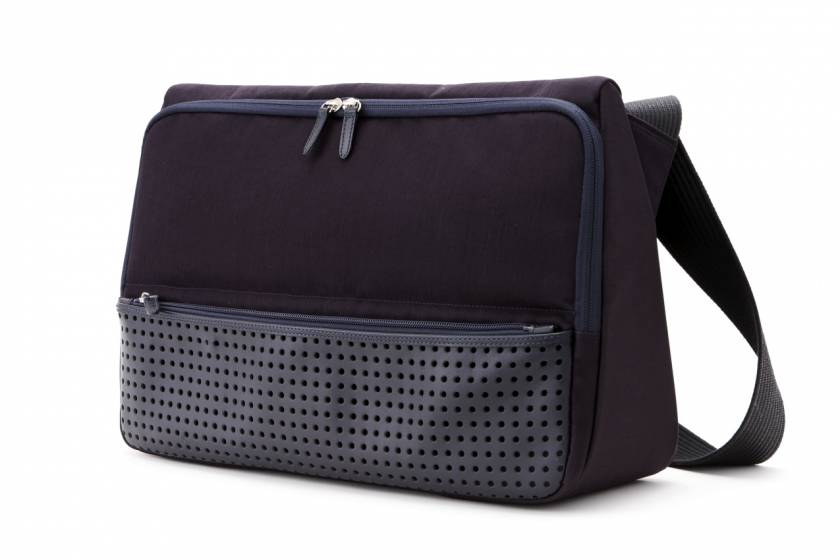 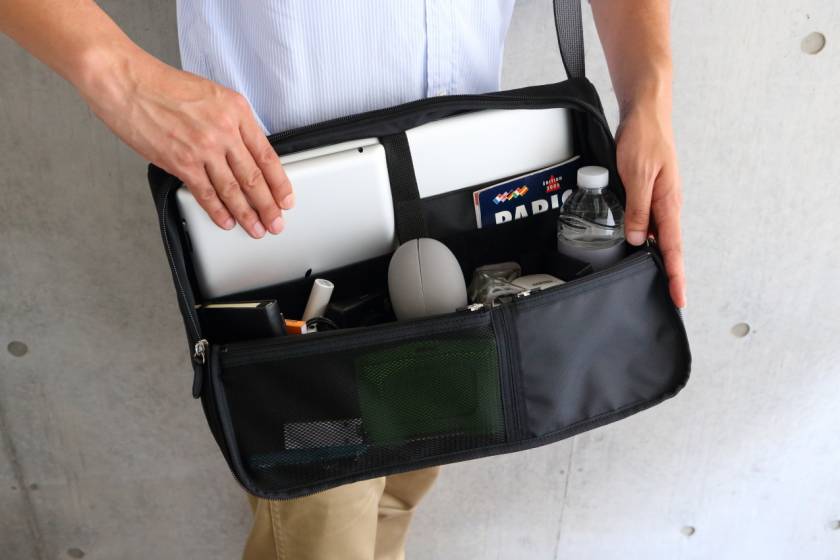 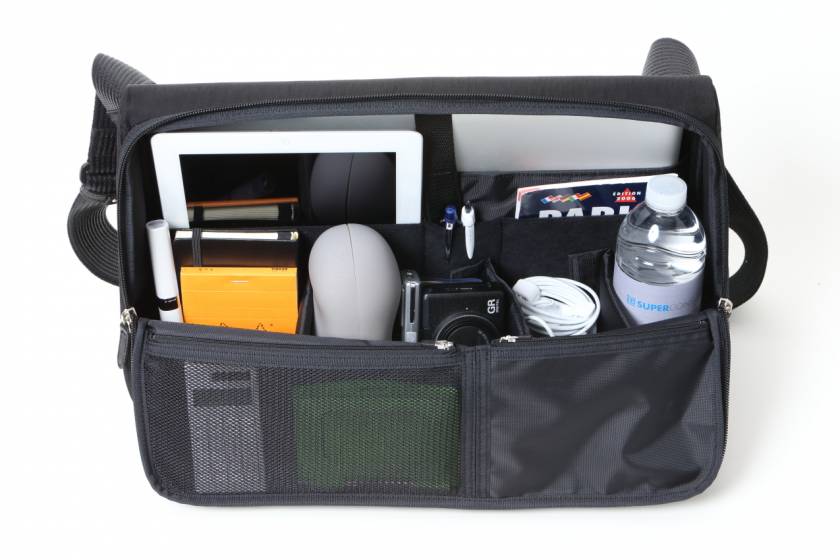 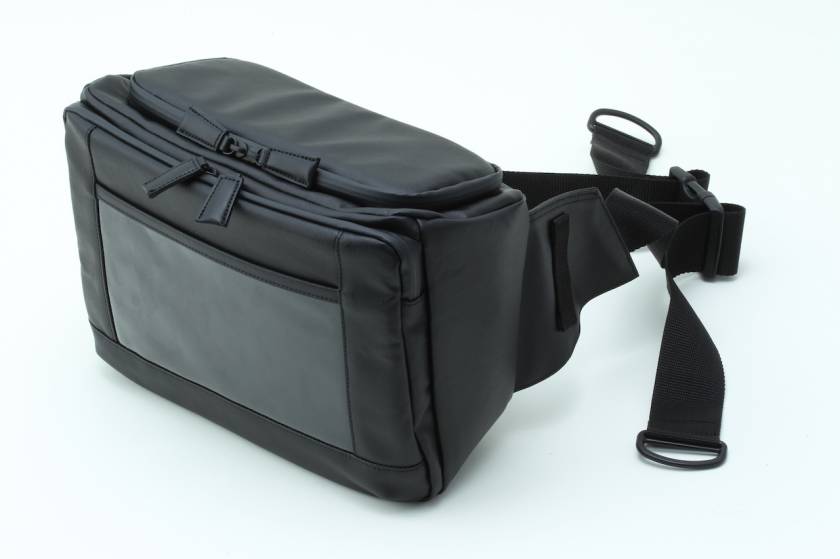 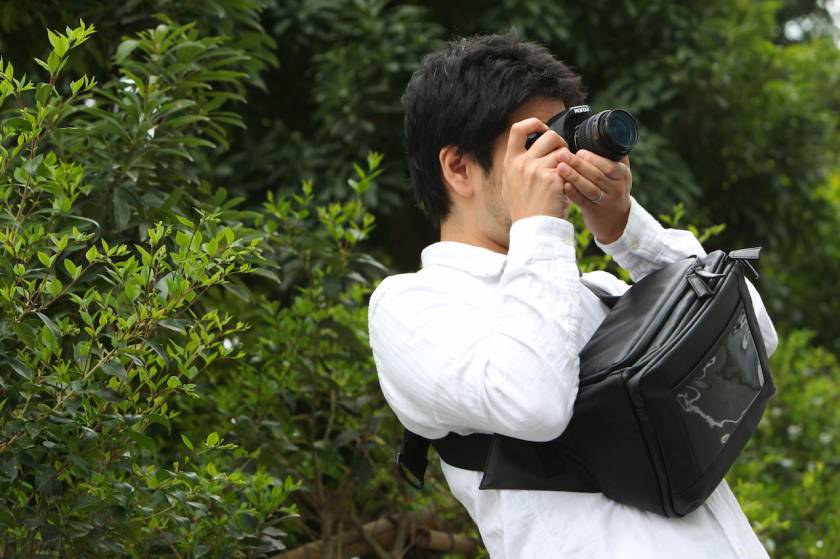 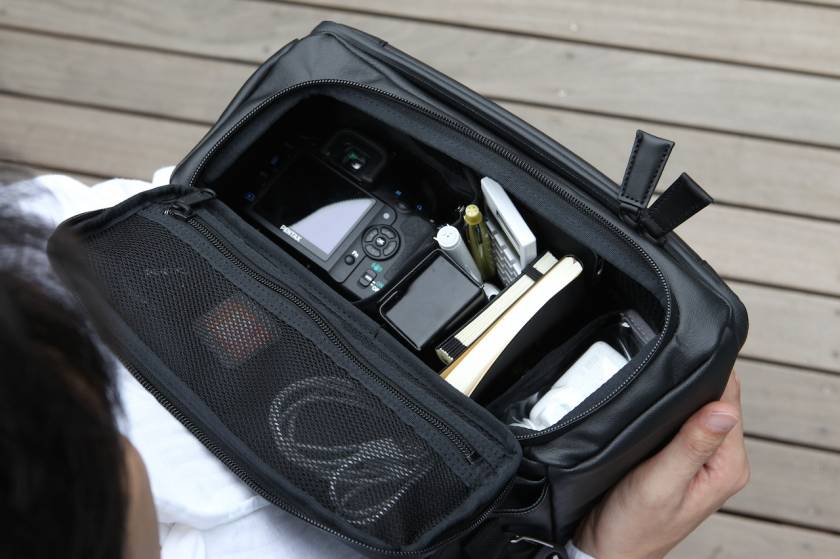 “Many people may think of this project as a way to create products through collective wisdom. In reality, it is the exact opposite of collective wisdom because the project focuses on creating items based on ideas from individual people.”

Minami feels that creating products through collaboration or collective wisdom is not interesting and leads to very average products. When many people work together on a single product, the team ends up spending most of their time looking for mistakes in the product. This project from Minami focuses completely on the individual and the uniqueness of the idea, making those ideas into real life items.

Value Innovation is a very unique company. As elaborated on before, Minami founded the company as a way to continue doing things he enjoyed.
“I am not very attached to monetary value. Although I do want to create things that help society, I don’t need to be recognized. More than anything, I want to enjoy the time I spend working.”

For Minami, the time he spends solving problems and creating products is just that: enjoyable. In order to continue this way, he is not planning to become listed or sell parts of the company. He also has no reason to grow the company, as he wants to continue working on things that he wants to do.
“Ships sail more smoothly when there is only one captain. Product creation and business are the same.”
This method of conducting a company has led to a profitable business model for Value Innovation.

This type of anti-capitalism feels incredibly fresh to the majority of us. In today’s society of high-speed information and developed industry, companies all over the world are rethinking how to do business and what it means to be a company. Value Innovation may be one of the solutions to this problem.

At the moment, Minami lives with his family in Kuala Lumpur, Malaysia. “I studied at college in the US and had the opportunity to work around Europe. But I always wanted to experience living in Southeast Asia. As long as I am able to connect to the internet, I can communicate with my staff whenever I need to. There is no reason I need to be in the company offices to get work done.”

In a month, Minami spends 10 days in Tokyo, 10 days in Malaysia, and the remaining 10 days in other Asian countries like Thailand and Indonesia researching about those countries. You could say this is one of the results of Minami striving to spend his time enjoyably.