pixiv, an illustration communication service with over 3.8 billion PV (page views) per month and 10 million users, is a hugely popular SNS. It is led by Takanori Katagiri who founded the company with his friend in 2005 while he was a college student and developed it into a company with 80 employees. The unique office design reflects his ideals for an organization emphasizing communication, and is attracting attention in and outside the industry. 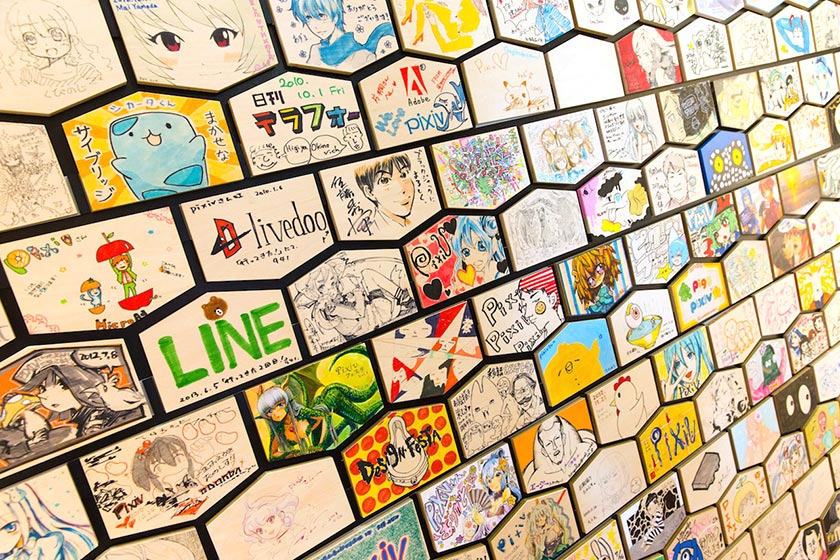 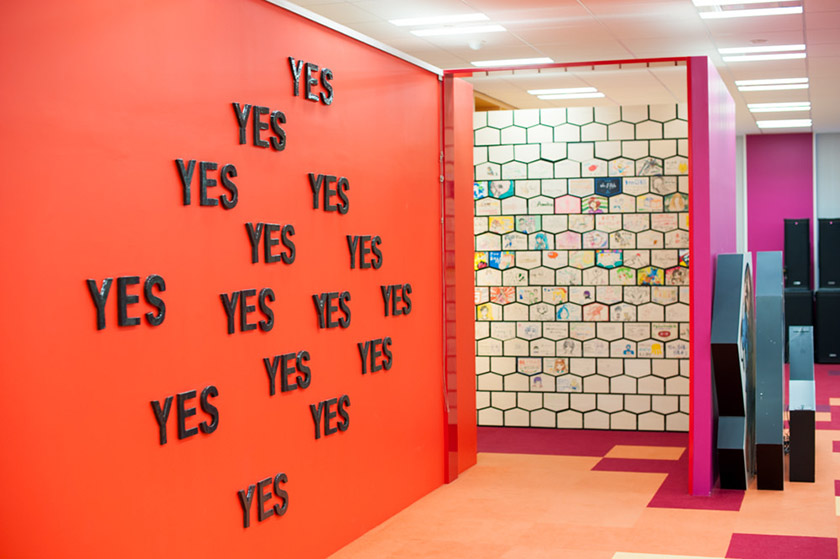 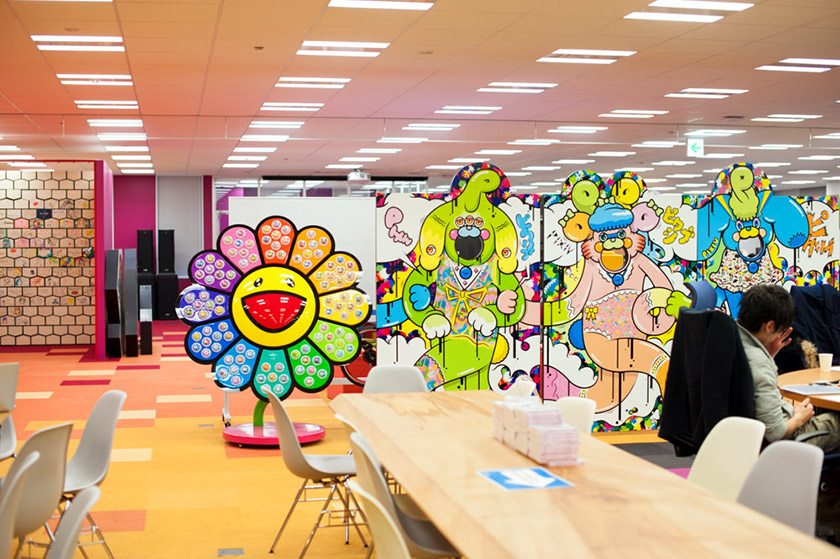 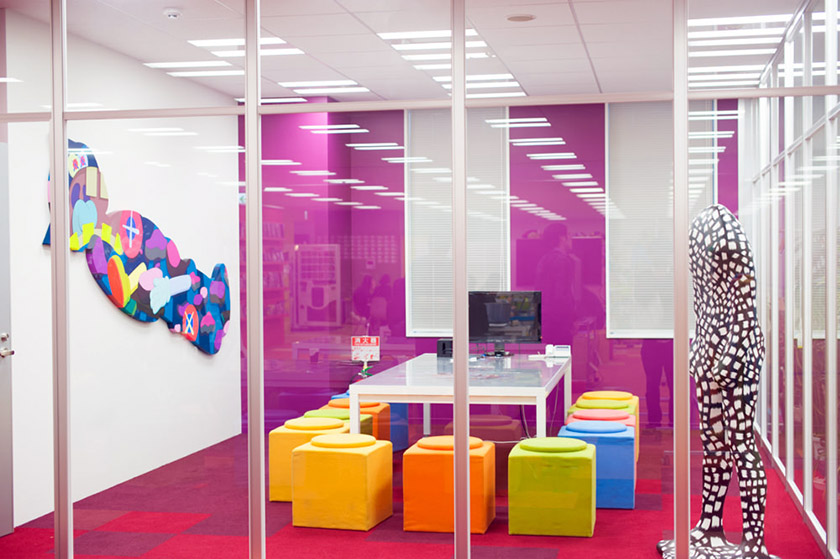 Shocked by the internet at college

The roots of Katagiri’s company can be found in his high school days. He grew up in northern Hamamatsu City in Shizuoka Prefecture along the Tenryu River. He lived alone to go to a high school in the center of the city. He often talked of the future with friends, but had no particular interests or dreams. Even so, it was fun to be with his friends and thinking of a way to prolong the fun led to his desire to start his own company.

There is also the influence of his hometown locality. Hamamatsu City is known for its numerous independent businesses especially in the field of manufacturing. The city is home to companies such as SUZUKI, HONDA and YAMAHA, which all developed into international companies. Katagiri’s family was also self-employed, “My father owned a photo studio and my mother ran a coffee shop. So it was natural to help after coming home from school,” Katagiri mentions.

The chance to start a business came when he encountered computers and the internet at college. Upon entering college, his professor advised him to buy a personal computer and he devoted his time to it. “I still remember the thrill when I first connected to the internet in 2000. I thought I would be able to start a company with somebody out there on the net. My peers at college were too excited over their new life, living alone, playing mahjong or enjoying extracurricular activities. So the choice of starting a company with them was out. But with the internet, I believed I could find a good partner.”

Once Katagiri studied programming and web design, he started creating homepages and audiovisual contents with his friends while still attending college. He had no intention of making it a business at first but in 2005 he made the transition. He embarked on his business with Takayuki Sakagami (pixiv executive officer) who taught him the basics of web design. Initially they took on website design, but after starting up a site, pixiv for illustrations business took off.

The concept of pixiv is to create a place where creative activities could become more fun. The current slogan is “It’s fun to draw!” In Japan there are a large number of people who like drawing (not fine art but illustrations including manga and child painting). The quality is also high. Animation and manga are ingrained in the culture so illustrations can be seen everywhere from government pamphlets to construction sites. People of all ages enjoy drawing. High school students doodle in their notebooks and the elderly enjoy refined postcards adorned with drawings. However, there was no place on the net for people to gather and show and review their pictures. pixiv caught onto those needs.

“Having fun with friends” may have been at the core when starting his business, but it was not what kept it going. It was Katagiri’s attributes that made it into more than a buddy-buddy group.

First of all, he had the unrelenting persistence for good products. Katagiri looks back. “Especially at the early stages before pixiv found its voice, I declared that the product was of the utmost importance. I did not care about the employees’ happiness. I told them openly that if I had to choose between an employee and a user, I would choose the user without missing a beat.”

Also, he was highly interested in corporate structure and had clear ideals from an early stage. “My company is like my own art piece. Even before I started the company I had been thinking about my ideal company and read books like Built to Last: Successful Habits of Visionary Companies by Jim Collins.”

As he thought about the structure, he placed more importance on the product. When he heard about a super-talented engineer who changed jobs, he realized that the skilled people he wanted to work with were not attracted to the size of the company but the quality of the product. So Katagiri thought, “I’ll make an awesome product.”

Furthermore, he met the right people. Katagiri explains this referring to the Momotaro Theory from the book Confessions of Self-made Millionaires by business consultant and innovator Masanori Kanda.

Momotaro is a well-known folklore in Japan. A boy, who was born from a peach (momo in Japanese), sets out on a quest to slay some demons. On the way, a dog, a monkey and a pheasant become his followers. According to the Momotaro Theory, Momotaro symbolizes the entrepreneur as the leader, the dog is the operating manager, the monkey is the administrative manager and the pheasant is the human relations manager. As the company expands, the entrepreneur meets people with these qualities and leads his business to success by acquiring these allies.

Katagiri says that he experienced similar encounters. “I’m not good at managing money. But Hiroaki Nagata (Vice President) came to the company with high practical business skills and Hirohisa Tamonoki (COO) took care of all the management.” Also, the fundamental system for pixiv was developed by Katagiri’s friend Takahiro Kamitani (Lead Engineer).

The necessary talent at the necessary time led to the development of pixiv. This kind of synchronicity is often heard of at the initial stage of a successful company, but it is not something that can be planned. Maybe it is the kind of luck that only the enthusiastic entrepreneurs possess.

Achievement as a team

Katagiri treasures the manufacturing of goods as a team. “With the prevalence of the internet and the development of technology, it is possible for any individual or entrepreneur to make their own product. This means companies have to make products that can only be made with teams. If the competition are individuals around the world, then we have to rethink the concept of making a product as a team.” With 3D printers and other technologies, anybody with a little skill can make their ideas a reality, as Chris Anderson mentions in Makers: The New Industrial Revolution. So we must ask ourselves; what should an organization do, and what is the strength of a team?

Assessment is also based on the team.

“In a company like ours where most of the profit comes from advertisements, the advertisement sales team tends to get the credit. But profit does not come only from the effort of the sales team but from the integrated effort of other teams. That’s something I cannot forget to look at.”

Katagiri also thinks that in order to invigorate the team, aspects which are normally not considered abilities should be recognized.

“For instance, there are people who make the team feel happy and comfortable just by being there. I believe that to be an important ability too. Rather than having one individual with high skills, it is more important for all the characters and talents to interact to bring about great achievements as a team.”

In hiring he considers obedience, kindness and positive attitude to be important attributes. This way of thinking may not be MBA-type rationalism, but it is part of the appeal of pixiv. Although pixiv is a cutting-edge company, it seems to have the traditional Japanese community warmth. 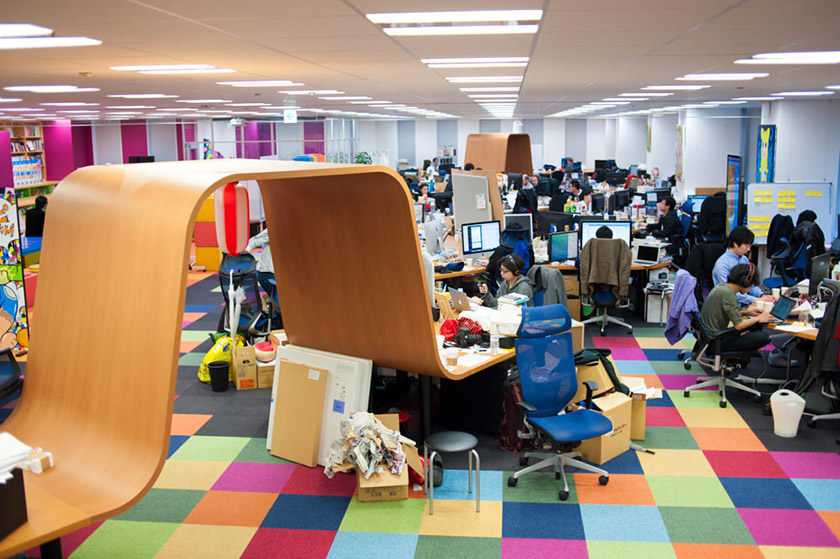 In order for the team to yield results it is certainly desirable for the members to have good communication and get along with each other. With that ideal in mind, pixiv redesigned the office when it moved in 2010.

On entering the office, the vibrant colors strike you. The whole floor is like a village along a river, with the desks connected in a curve along the winding paths. There is also a space called “dohyo”, a sumo-wrestling ring, which is a raised platform with stacked pillars and steps. The office is like the natural landscape or an experimental school. 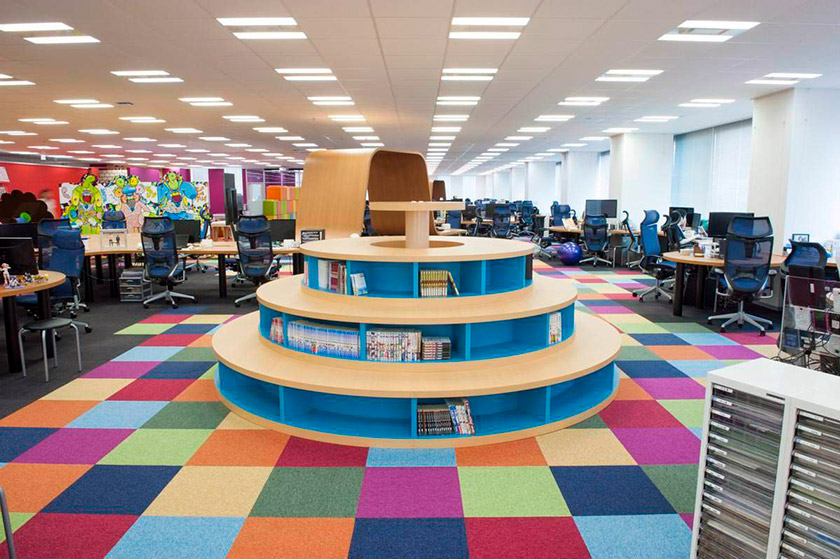 The design is based on a poem titled Forest of Desks written by Katagiri. “At the previous office I made the desks wider in order to make it easier to work. But the space between people also widened and it actually became difficult to have good communication. So I wanted to put the desks closer this time to create an intimate atmosphere and came up with the tangled forest-like structure. You have to walk by other people’s desks to get to your own desk, and that prompts communication. That was the idea.” Talking to the construction company, he found out that it was structurally possible and made the current layout.

“There are many companies that make cafes and other things to make a fancy office, probably aiming for PR effects. I had no such intentions. I put emphasis on creativity and productivity.” The abundant colors and structure with vertical variety inspire ideas, while the weaving corridors and desks increase the opportunities for employees to interact.

Katagiri says, “(In the new office) the employees find it easier to talk with each other and enjoy working. The structure seems to be going very well.” Three years after moving to this office pixiv user reached 10 million in 2014. Users from abroad are steadily increasing too.

Some people ask whether employees feel stressed in the open space with no partitions. Katagiri says, “I would like people to look at the system and atmosphere, not just the office appearance. At pixiv, we place value on coming at the same time and working together in the same space. But we do not try to control. That means if employees feel stressed they can go out and take a break. A lot of employees take advantage of the housing subsidiaries supplied according to nearness to the office, so they can even go home to get refreshed.”

The challenge will arise as the company expands and the number of employees increases. The ideal company that Katagiri envisioned was with few employees, one product, high profit rate and a global network. ”YouTube and Instagram took that form initially. When you think of it as a business you can’t avoid increasing the number of employees. We also plan to do so.”

There are currently around 80 employees but can the intimate atmosphere be retained when that increases? How can flexibility and creativity be maintained when the average age rises? These questions have yet to be asked. These are also obstacles that every venture company has to overcome.