A new design category on DMIJ is in order for this project: Performance & Stage Design. This project also fuses the categories video, animation and creative programming, which are specialties of Tokyo based Rhizomatiks Inc. Rhizomatiks is well remembered through their spectacular sound installation Sound of Honda – Ayrton Senna 1989 which won the Grand Prize at the Japan Media Arts Festival 2014.

Rhizomatiks is headed by creative whizkid Daito Manabe who in the early days of 2008 made a name for himself with his electric stimulus to face experiments:

The new project was performed at Spiral Hall in Tokyo and is simply called:

This is a collaboration developed by elevenplay×Rhizomatiks who has been the pursuing possibilities of relationship and interaction between the body and technology by interacting with a variety of hardware and devices such as robot arms and motor-controlled floating balls. In this new work, objects are arranged three-dimensionally in real space through a tracking technology and drone control system, and the work, in which dancers give performances, has been presented so as to find the possibility of a new bodily expression.

The flying quadcopter drones  – with pointy pyramid hats for technical reasons –  seem to become the main actors on stage the further the performance progresses. Luckily Rhizomatiks provides some further explanations for the project: 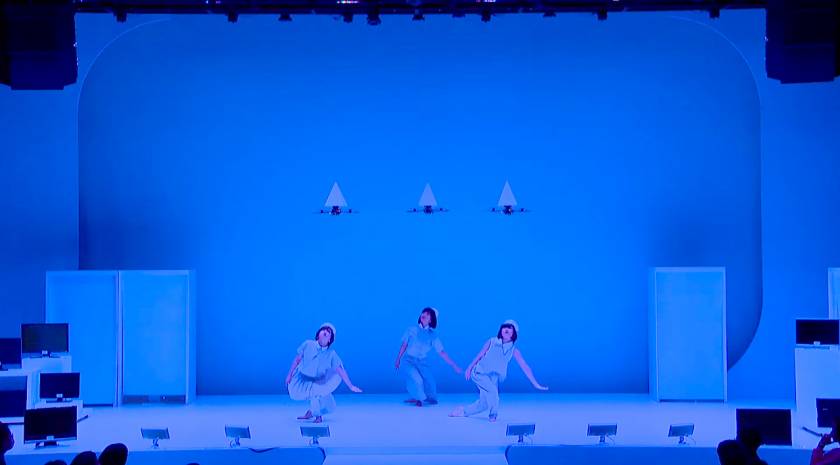 With the development of video and image analysis technologies, trials to deal with the body as data and to expand the body have been conducted using such methods as Virtual Reality and Augmented Reality. One problem was, for instance, that a dancer had to wear a head mounted display or while looking at images on a projector. Since an intuitive approach is still difficult, a new experimental work employing advanced control and analysis technologies is required. As there is a limit to the output of images, it is necessary to use physical devices and objects so as to expand bodily expression presented in real space. 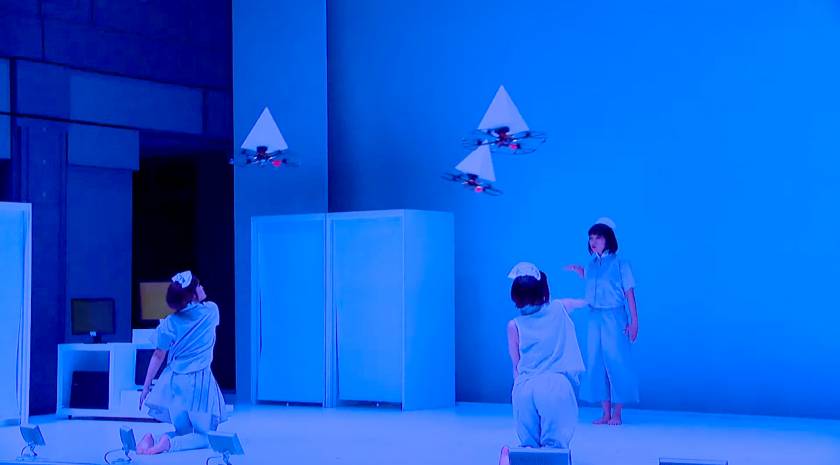 A system in which dancers can physically and more intuitively perceive the relationship between the body and data through computer-controlled drones has been developed. There are two kinds of drone movements: a motion produced by tracking a dancer’s movements and an artificial motion operated on the software. At first, dancers had to be trained to interact with the drones because they could not predict how they would move, but eventually they were able to dance with the drones as closely as 10cm away from them. 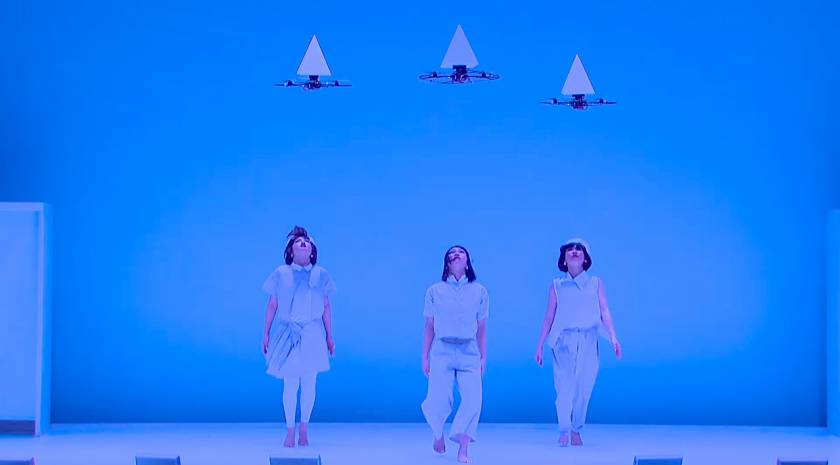 Cameras with the motion capture system are used for the position analysis of the drones, 10 to 15 of which are needed. They are installed on the ceiling with a camera mount, or set up around the stage using tall tripods. Three retro reflective markers are attached to each drone so as to identify the position and angle. (See the figure for details.) 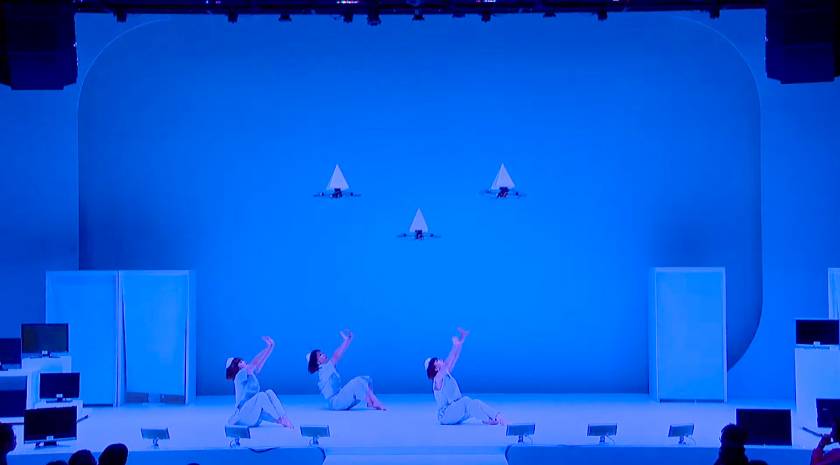 Using the position information of the drones, tracked by the motion capture system, the positions of three drones are controlled through feedback control. AscTec Hummingbird 2012 is used for the drones. In order to cope with problematic situations, manual operation is available at anytime; so if the tracking system has a problem, the drones can be landed automatically and safely. 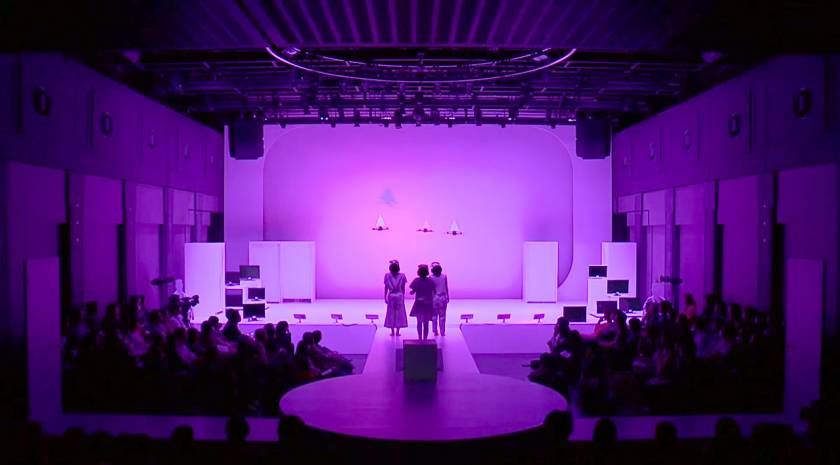 Flight patterns have been created through various methods, e.g. producing them with original software, importing data from CG software, and using Ableton Live. For the analysis of the dancers’ movements, the conventional method is used with retro reflective markers attached to them and motion capture cameras. We adopted a method in which these data are recorded, or captured in real time, processed, and played back so that the drones move according to the dancers’ movements. 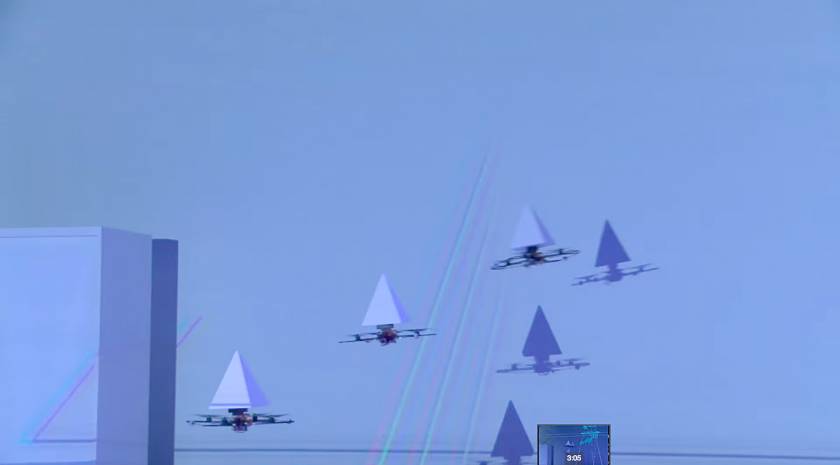 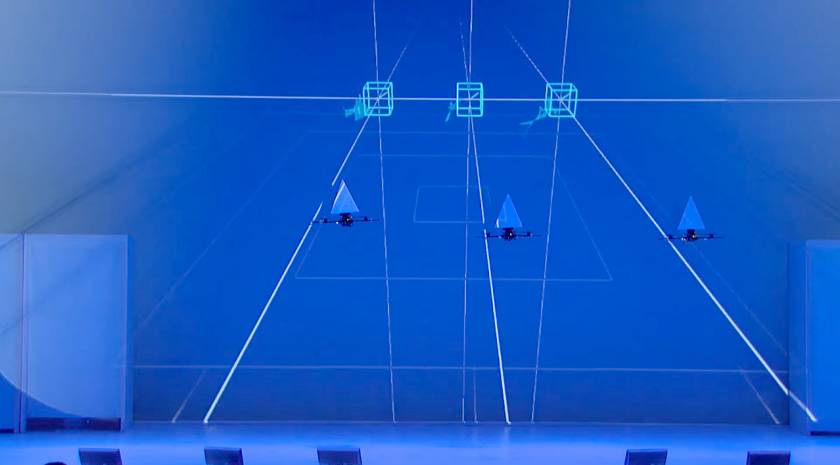 The dance shows the beauty and difficulty which come from resistance to gravity and inertia. Viewers are able to appreciate this naturally through their experience, and the same thing applies to the drones. The limits, motion dynamism, and a locus that is impossible to make with CG are produced by physical laws such as gravity, inertia and air resistance. Though the three-dimensional object was originally attached to improve visibility, it eventually played not only the role of making drones look bigger but also became an important element in emphasizing the motion and visualization of the interaction between the dancers and the laws of physics. 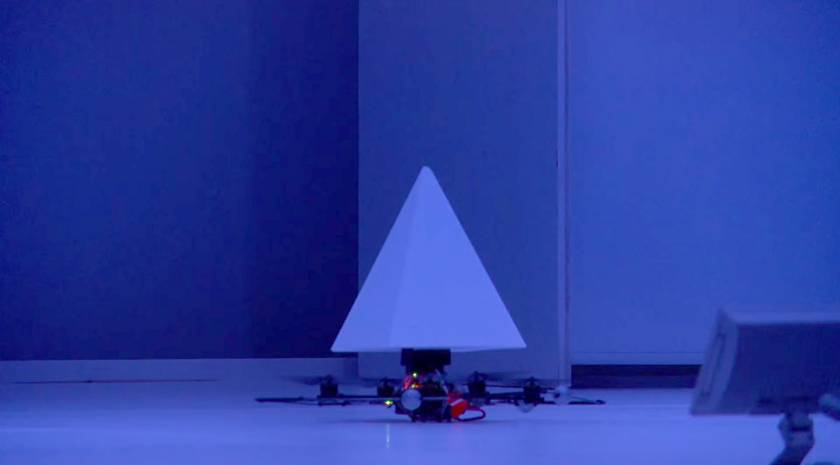 As a step further, a projection was sometimes conducted for the object attached to the drone in order to improve visibility. While the system functions, the content has potential for further development. The work will be continually updated in the future.