In a very short amount of time we’ve gone from gasoline powered cars to hybrid, electric vehicles (EVs), and fuel cell powered cars. The international automobile industry is responding to these rapid changes by developing new ideas and technology. One small Japanese venture company, FOMM, is looking at penetrating the Southeast Asian market by developing EVs that can withstand the flood disasters that plague the region – a heretofore unprecedented move.

In February 2014, FOMM, a newly founded venture company gained a lot of media attention when they announced the release of a micro EV called the Concept One. The reason it gained so much attention is because this tiny car is packed with a lot of unique features that major automakers would never have thought of.

EVs were originally developed in answer to the environmental and resource problems facing developed nations. That is why the EV’s main target markets were developed countries, since they have advanced technology, a high degree of environmental consciousness, and many interested consumers. In addition, up until now, the media focus on EVs has been less about EVs as a whole than on their overall potential as a next generation power network infrastructure, e.g. the rechargeable batteries loaded into EVs can serve as a temporary standalone power source in case of outages.

However, the Concept One was developed from a perspective different from the trends dominating the EV market. This tiny EV’s primary target market is the Southeast Asian market; it’s the smallest 4-seater in the world and, amazingly, it can float on water.

Hideo Tsurumaki, the founder of FOMM, has a slightly different background from the typical automobile engineer. After developing scooters and motocross bikes for 15 years at Suzuki, Tsurumaki joined Toyota Group’s Araco (currently Toyota Auto Body) subsidiary, where he had a hand in developing the Coms single-seated micro EV, and the i-Unit and i-REAL “personal mobility devices.”

Drawing on his experience, Tsurumaki founded FOMM and created the Concept One vehicle. FOMM stands for First One Mile Mobility. In other words, the vision of the company is to provide a means of transportation over short distances – that “first one mile” from, for example, your home to the nearest train station.

Tsurumaki has spent a lot of time thinking of the advantages the EV has over the traditional gasoline powered vehicle.

“When I was starting FOMM, I began to list the advantages of an EV over a gas vehicle, and came up with a hundred of them. One of the advantages is that you’d be able to use the motor in the water. Engines require oxygen to function, so they won’t work in the water, but a motor is a different story. From there I considered the possibility of a vehicle capable of floating on water.” That was the instant the Concept One was born.

Tsurumaki’s inspiration also comes from a personal place. “In the aftermath of the Great Tohoku Earthquake and Tsunami that occurred on March 11, 2011, I was attracted to the concept of a vehicle that could float on water. For people living along the coastline (especially the elderly), escaping from a large-scale tsunami is extremely difficult. However, if you have a floating car, you have a greater chance of escaping in times of disaster.”

A car that floats could save lives in times of disaster – this idea linked with Tsurumaki’s experience in Southeast Asia’s EV industry. “This vehicle could benefit countries prone to flooding such as Thailand and Indonesia. Because it’s an EV it won’t produce exhaust fumes, and because it’s so very small it won’t run into as much trouble with traffic jams. Many countries in Southeast Asia are rapidly developing, and the need for a car will develop along with it. EVs can make a massive contribution to that development.”

The target market region has already been decided. Most EVs are 2-seaters, but research data has shown that they don’t sell well in Southeast Asia. At first, a 3-seater car was planned. However, studies conducted in Indonesia and Malaysia showed that at the very least, a 4-seater car would be needed. Car ownership is still relatively low in developing countries. On top of that, people who do buy cars tend to drive with family members and friends. That’s why the Concept One was created as a 4-seater from the start.

The reason the Concept One can float is because of its dual layer body. The inner layer is made of a plastic resin that allows it to float. On the other hand, the outer layer is made of ABS plastic (acrylonitrile butadiene styrene), which means that even if the vehicle were to bump into something in the water, the car could withstand any potential damage and continue to float.

To add more room for passengers, the Concept One uses in-wheel motors (developed in collaboration with Sinfonia Technology). The biggest draw here is that the in-wheel motors aren’t placed in the rear wheels of the vehicle, but in the front wheels. There are two big advantages to this. The first is that with the motors placed in the front wheels, you’ll be able to steer in the water. The second is you can make the most of the regenerative energy harvest yield. “The only issue is that the steering mechanisms would become complicated, so we struggled with some issues, for example how to find a way to successfully connect the cable that links the motor and inverter,” says Tsurumaki.

The car runs on detachable lithium ion cassette type batteries, and is capable of holding up to three sets of batteries (there are two batteries to a set). With six batteries in place, the Concept One has a range of 100km. The car can also run without batteries by charging the car itself at home.

The wheels are slim and shaped like fins. They absorb water, which is pumped through water conveyance plates surrounding the in-wheel motor and is pushed out the back of the vehicle, aiding in its propulsion. These fins are specially designed. “We’ve made the pitch of the fins quite thin. If they’re large, they’ll suck in debris whilst in the water, which makes them more susceptible to damage. We’ve also made pitch of the fins random, so as to reduce the background noise that would otherwise result when the car is in the water.”

Tsurumaki’s experience with developing motorbikes is especially evident in the steering mechanism. Instead of axles and pedals, the Concept One can be maneuvered with your hands, just like a motorbike. As a result, the front seats have been moved up significantly, leaving the rear quite spacious. The in-wheel motor ensures that while the car is quite small, it is capable of seating four people. The dimensions of the Concept One are 2495×1295×1550mm (total length x total width x total height), which makes it the smallest 4-seater EV in the world. 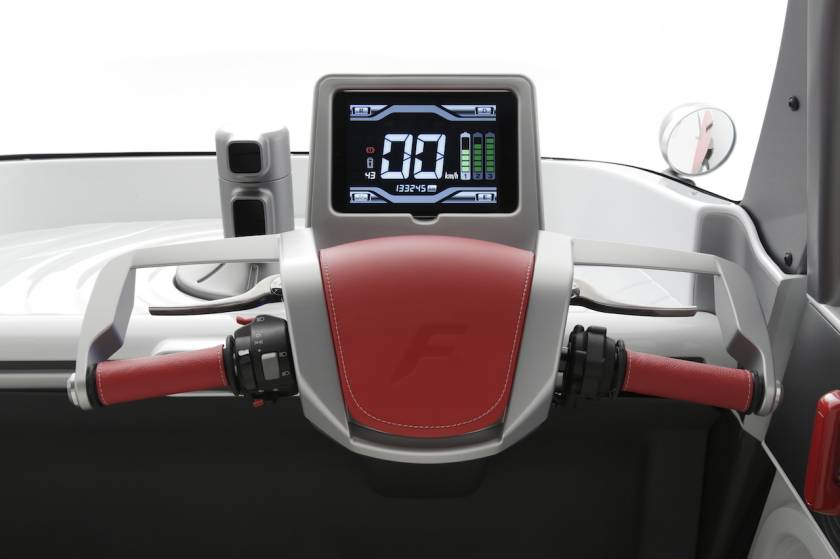 There are special features added to the sliding doors too. Since the car is designed to float, the doors and body have been fitted with weather strips on both sides (rubber parts that cover any gaps) to create an airtight cabin. 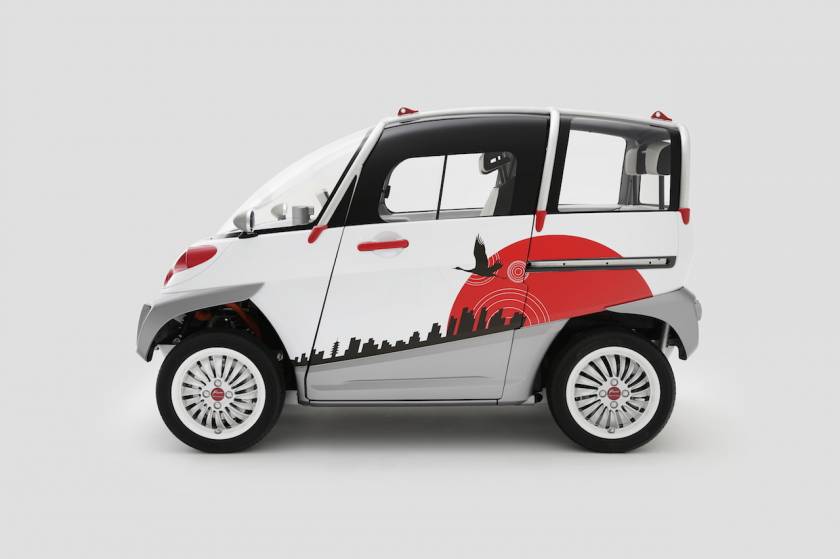 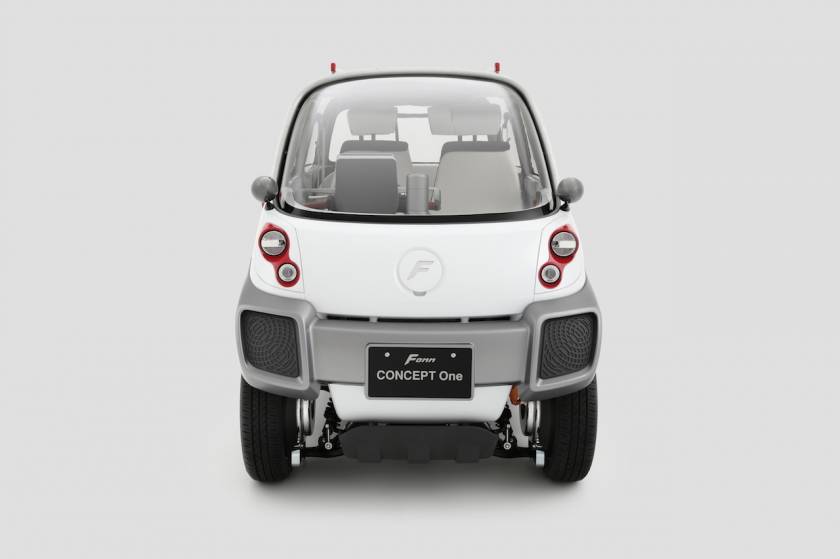 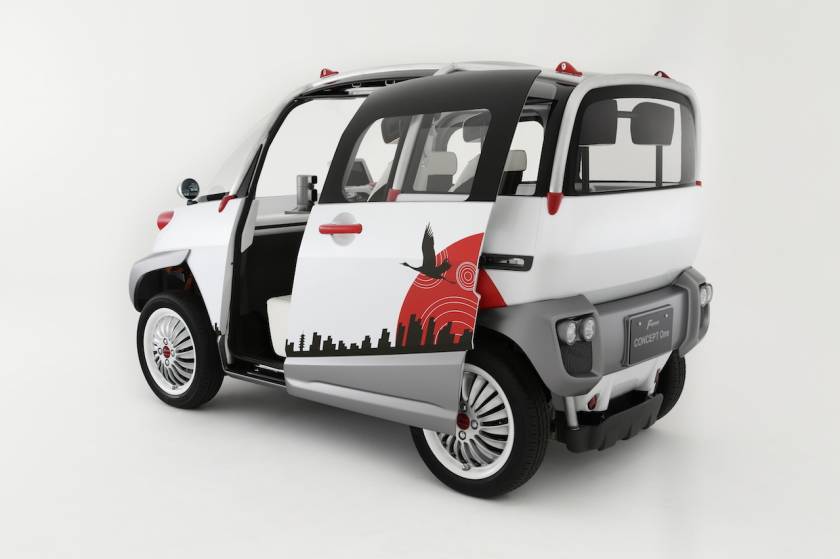 Although the Concept One is targeted at the Southeast Asian market, Tsurumaki said he would especially like women to drive this car. “It’s small, easy to drive and ideal over short distances. It’s perfect for women when they want to go shopping or commute to the office.” FOMM is not just aiming to compete with gasoline cars or motorcycles – they’re aiming to develop a whole new market.

The Concept One was exhibited in March 2014 at the Bangkok International Motor Show. Getting feedback from surveys at the motor show, FOMM is planning on making further improvements to the car. Their goal is to mass produce it by September 2015, and begin selling by October of that year.

The R&D and design will be done in Japan, while the production will be carried out in Thailand. The car is expected to cost just below 1,000,000 yen (about 300,000 Thai baht). By making the batteries optional (batteries actually make up the majority of the cost in EVs) and leasing them instead, FOMM hopes to make the car as affordable as possible for the consumer.

“Once we get on track with selling the car in Thailand, we’d like to introduce the car to the European market, as there is already a market for micro EVs there,” Tsurumaki says. The Concept One already meets Europe’s L7e standard (L7e standards are based solely on motor capacity and the vehicle’s weight), which means the car can be registered with its current specifications. Currently, there are no plans to release the car in Japan, the Americas, or other nations.

FOMM’s press release of the Concept One has caused quite a sensation, with Japanese consumers (especially the elderly) demanding the vehicle’s sale in Japan. Consumers from as far away as Cambodia have also expressed an interest.

Tsurumaki is quoted as saying that he would next like to take on a four wheel drive version of the Concept One, and electric motorbikes. “I don’t have any desire to develop big cars. I want to make FOMM the world’s #1 auto maker with small vehicles like these.”